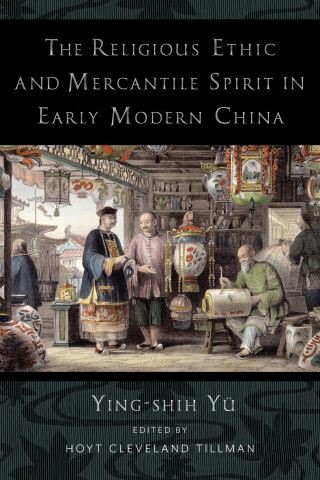 The Religious Ethic and Mercantile Spirit in Early Modern China

Why did modern capitalism not arise in late imperial China? One famous answer comes from Max Weber, whose The Protestant Ethic and the Spirit of Capitalism gave a canonical analysis of religious and cultural factors in early modern European economic development. In The Religions of China, Weber contended that China lacked the crucial religious impetus to capitalist growth that Protestantism gave Europe.

The preeminent historian Ying-shih Yü offers a magisterial examination of religious and cultural influences in the development of China’s early modern economy, both complement and counterpoint to Weber’s inquiry. The Religious Ethic and Mercantile Spirit in Early Modern China investigates how evolving forms of Buddhism, Confucianism, and Daoism created and promulgated their own concepts of the work ethic from the late seventh century into the Qing dynasty. The book traces how religious leaders developed the spiritual significance of labor and how merchants adopted this religious work ethic, raising their status in Chinese society. However, Yü argues, China’s early modern mercantile spirit was restricted by the imperial bureaucratic priority on social order. He challenges Marxists who championed China’s “sprouts of capitalism” during the fifteenth through eighteenth centuries as well as other modern scholars who credit Confucianism with producing dramatic economic growth in East Asian countries. Yü rejects the premise that China needed an early capitalist stage of development; moreover, the East Asian capitalism that flourished in the later half of the twentieth century was essentially part of the spread of global capitalism.

Now available in English translation, this landmark work has been greatly influential among scholars in East Asia since its publication in Chinese in 1987.

Ying-shih Yü is Gordon Wu ’58 Professor of Chinese Studies Emeritus at Princeton University. Awarded the John W. Kluge Prize for Achievement in the Study of Humanity and the inaugural Tang Prize International Award in Sinology, he has published almost sixty books. His works in English include the two-volume Chinese History and Culture (Columbia, 2016).