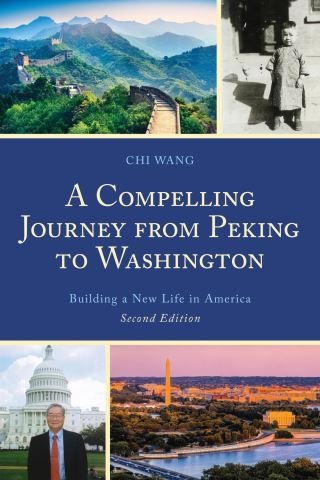 A Compelling Journey from Peking to Washington

Building a New Life in America

A Compelling Journey from Peking to Washington follows the life of Chi Wang. We are first introduced to Wang as a young child fleeing with his family through China from encroaching Japanese forces. We see the ravages of the Sino-Japanese war from the eyes of someone who lived through it, only to have the post-war peace quickly overshadowed by a growing civil war between the Nationalists and Communists. During this tumultuous period, Wang’s father served as an important Nationalist general, allowing a deeper picture of these conflicts to emerge. Wang then decides to leave China for the United States just before the People’s Republic of China is formed. His new life in America begins as the China he grew up in is changed forever. As Wang adapts to living in America, he also has to come to terms with the increasing distance from his homeland due to the ongoing Cold War. He yearns to stay connected with the land where his family still lives while giving back to his adopted home. He accomplishes this through a long career where he is actively involved in fostering US-China understanding and educational exchanges. Through Chi Wang's experiences and memories, readers will also gain insight into key developments in U.S.-China relations from someone who saw them unfold. Some of the major highlights of his career include a groundbreaking trip to China on behalf of the US State Department in 1972, shortly after Nixon’s own trip; nearly fifty years working at the US Library of Congress where he became the head of the Chinese and Korean Section, successfully growing its collection from 300,000 volumes to over one million; and the founding of the US-China Policy Foundation in 1995. The first edition of this memoir was awarded the Chinese American Librarian Association (CALA)'s Best Book Award in 2011.

Chi Wang is currently the president of the U.S.-China Policy Foundation.