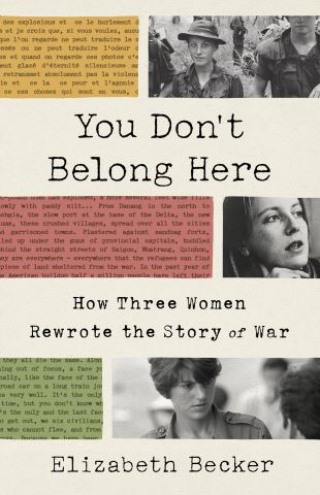 How Three Women Rewrote the Story of War

The story of three fearless female journalists who courageously reported from the frontlines of the Vietnam War, and transformed the future of war reportage.
One spent 23 days in captivity. Another jumped off planes to get the perfect aerial shot. The other reported from war-torn slums and villages. Catherine Leroy, Frankie Fitzgerald and Kate Webb were the first female frontline journalists in the history of US war reporting. Over the course of the Vietnam War they challenged the rules and expectations imposed on them, all in an effort to get the story right.
Using the stories of Catherine, Frankie, and Kate, Elizabeth Becker traces the war in Vietnam from the Tet Offensive to the revolution in Cambodia to the American defeat and aftermath. Kate Webb, an Australian reporter, was captured by the Vietcong only to continue her fearless reporting after her release. Frankie Fitzgerald arrived in Vietnam as a freelancer but her powerful coverage earned her bylines in The New Yorker, and she became the first woman war reporter for the magazine. And at only 22, the French Catherine Leroy was one of the only female photographers in Vietnam. Her work went on to win the highest accolades in photography, including the Robert Capa Gold Medal Award.
But aside from their numerous recognitions, all three women achieved something else; they overcame various setbacks and limitations all in pursuit of the truth. In You Don't Belong Here, Becker presents powerful female characters in a trailblazing narrative telling the story of how three women forged a place for themselves and for generations of female reporters to come.

Elizabeth Becker: Elizabeth Becker is an award-winning journalist and author who began her career as a war correspondent for the Washington Post in Cambodia. She later became the Senior Foreign Editor of the National Public Radio and a New York Times correspondent covering national security and foreign policy. She has been the recipient of numerous awards including accolades from the Overseas Press Club, DuPont Columbia's Awards and was a member of the Times team that won the 2002 Pulitzer Prize for Public Service in covering 9/11. She is the author of one previous book, When the War was Over: Cambodia and the Khmer Rouge Revolution, the definitive book on the event that has been in print for twenty years.
Elizabeth Becker lives in Washington D.C.